What We Did on our Winter Break

Tuesday marked a particularly cold day with roaring, bitter winds. So what to do? Why, decide to ride with two of my sons to our local bike shop to get my boys' bikes fixed...

Yes, it may have made more sense to just throw the two bikes in the back of the car and drive the two miles to the bike shop. However, I find it just too strange not to cycle there so we bundled up. C was home waiting for a friend to arrive, but S decided to ride himself over, and F got drafted to come along so C could play with his friend one-on-one, something that never happens in this home.

The older guys have gotten really proficient on their bikes but the sad truth is that in order for them to cycle around the city safely, they need to ride on the sidewalks. We've been taking trips downtown where P and I will cycle on the streets (with F riding on the Radish Xtra or Bakfiets), parallel to C and S on the sidewalks. We have to be in constant communication, especially when it comes to crossing streets, and I am always a bit on edge on some of the busier streets where folks could easily take a right turn without seeing the boys. Usually P and I sort of stop right in the middle of the street crossing and just block the path of cars until the boys ride right up on the sidewalk on the other side. 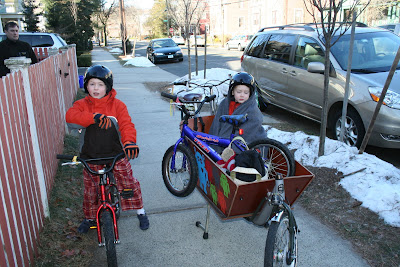 I mapped out a route to the bike shop that I thought might work for S's sidewalk riding. We were all extraordinarily thankful for our Bern helmets with fuzzy ear coverings. It helped that the wind was at our backs for most of the ride there so we enjoyed zipping down a couple of slight hills without the need to pedal. S had an extra challenge since his hand-brake was busted (one of the reasons we needed to visit the bike shop) and he is unaccustomed to using his pedal brake. He was such a champ though, pedaling furiously, listening well, and never complaining about the cold. F, too, earned some gold stars, wrapped in a fleece blanket, sharing the cargo box with C's bike and some ice skating gear, and cheering on his brother's riding. S felt such a sense of accomplishment when we reached the Devil's Gear. 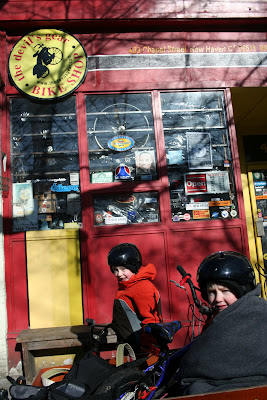 There, we dropped off C's and S's bikes to get fixed and cleaned up. We also had to visit the new Madsens, of course, and F and S took a few spins around the downstairs on some kids' bikes for sale. One thing I love about bike shops is that the folks that work there never get uptight about kids mucking around a bit. 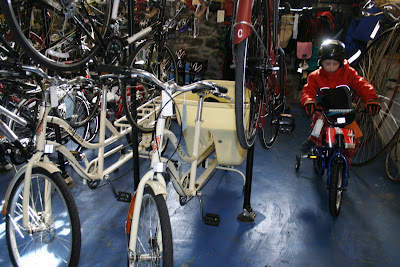 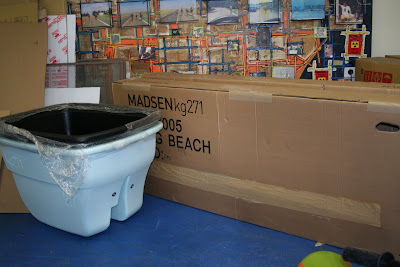 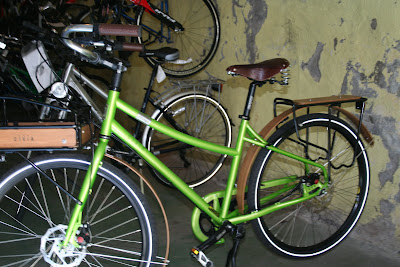 From the bike shop, both boys climbed in the Bakfiets and snuggled in close together. We decided to flip up the seat and have them sit lower, right on the bottom of the box, to hide against the wind, practically fully covered by the fleece blanket. It would have been helpful to have our rain cover, but we would not have been able to load the other bike in the cargo box on the way there. It was a bit tough pedaling into the frosty wind, but we made it to our city's public skating rink without frostbite. There, we enjoyed skating (F and S leaving the milk crates behind and skating on their own) and a snack break near the indoor fire. After more skating, we pedaled off and ate lunch at our local pizzeria (F with his helmet on), before heading home only to collapse and enjoy the feeling of all that we accomplished by our own pedal power. 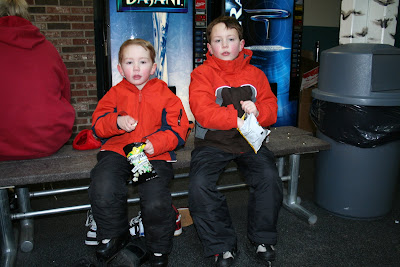 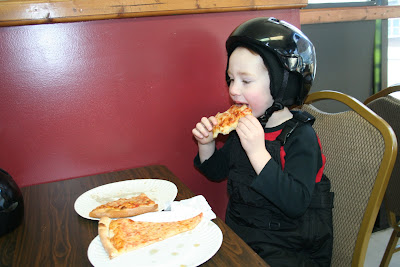 Meanwhile, look what C was working on at home while we were out.... 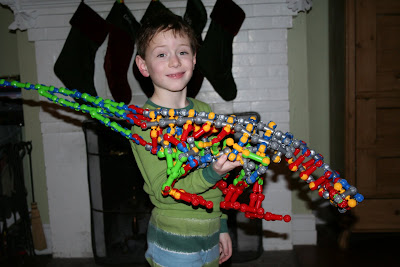 a Zoobasaurus!
Posted by sara

Brrr! Rock on you hard-core mama! Sounds like a fun day all around. Wow... I've never gotten into playdates with the twins... can't imagine orchestrating separate activities. You go! A wonderful and happy new year to you all! Can't wait to hear about your new year's adventures (midnight champagne ride through the blizzard?)

Oh Andrea, this is the FIRST time we had separate playdates for the twins. We made it a goal to try to give each of the guys one-on-one time with a friend & we actually pulled it off. But really, one time in 7 1/2 years is not at all impressive...

Yes! Bikes on bikes to the bike shop! I think my head might explode - Awesome!

Tell C I love his zoobasorus!