When I first began investigating cargo bikes on the web, I was really jazzed by photos of folks hauling Christmas trees by bike, like this one and this one. Since we became cargo bike riders, I now obsessively read other family bike blogs and this year, I was excited by all the posts duplicating the feat of carrying one's tree home by bike, like here, here, and here. I immediately began to fantasize about taking on the carfree adventure of getting our tree.

One issue, however, was that ever since we moved out of NYC, we made it an annual tradition to cut down our own tree. In Maine, we actually lived right down the road from a Christmas tree farm so that was an uncomplicated venture and here in Connecticut, there are loads of places in the surrounding area to cut down a live tree. However, there are really no Christmas tree farms close enough to which we could cycle. So we were left with the dilemma: drive and cut down our our tree or cycle and pick out a pre-cut tree. I just couldn't get the image of the tree on a bike out of my head though so I pushed for the latter.

So today, we climbed in/on the Xtra Radish and Bakfiets and set off for a local park. I felt pretty good about buying from the folks here because they run a program for adults with developmental disabilities and the proceeds of the Christmas tree sales were going there. We had quite a family discussion about which tree would come home with us. Everyone got a vote and not everyone was particularly pleased with the results. However, a choice was made and the tree was bought. Now the question-- how to load it on a bike.

Before we left the house, we had thought we would lash it to the side of the Xtra. However, at the park we realized that they didn't have a tree 'wrap' thing, which, of course, is better environmentally not to have that extra plastic holding our tree bound, but somewhat of a conundrum when trying to figure out how to lash a particularly fat and tall tree (little boys votes, remember, I would be pretty happy with a Charlie Brown tree myself) on a bike. The guy running the tree sales offered to deliver the tree to our home, but I felt that would defeat the whole point of the mission. I wanted to get this tree home by bike.

In the end, we simply loaded the tree on top of the Bakfiets. P, who is particularly good at knots, lashed the tree to the cargo box. The box now was well filled and we needed to get everyone home. Two of the boys could climb on the snapdeck of the Radish, but we still needed a spot for one more passenger. S volunteered ride on the back rack of the Bakfiets and it worked out quite well. We, of course, got lots of attention cycling to our apartment. All hurt feelings about wanting a different tree were forgotten as we rode along and sang carols at the top of our lungs. Even though rain started to fall, our jolly moods were not dampened as we made our way home. 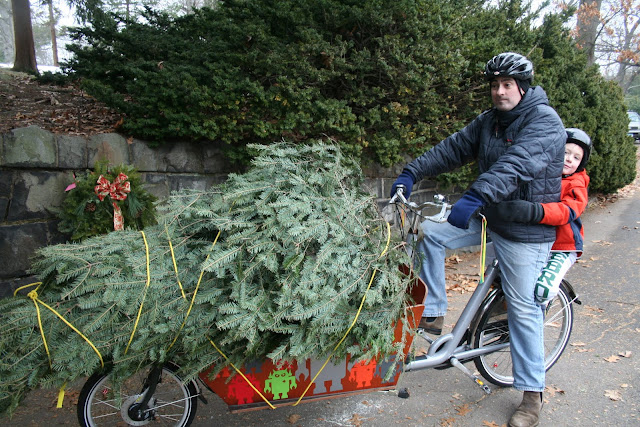 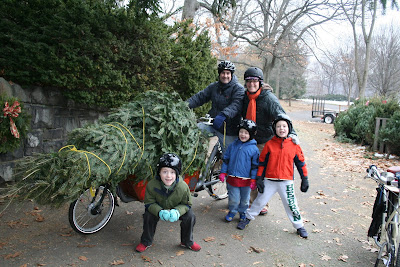 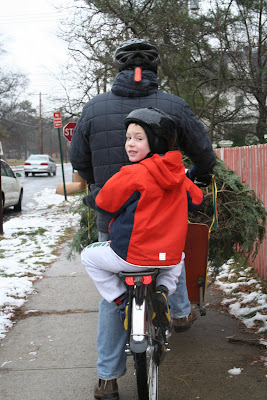 Even though we have hauled our tree by bike for the past 3 years, we still have the annual discussion about whether we will get the tree by bike or drive to the mountains and cut a tree.

love that the rear rack serves as kid seat as well!

Carols, Christmas trees, cycling...this will be an event that everyone remembers for years to come. Happy Holidays!

It looks gorgeous on that bike!! It's like they were made to be together. As a Floridian, I still can't imagine passing up the opportunity to cut down a tree, though. The whole "winter" thing is kind of like a fairytale to us. ;p

What a fantastic memory you've given to them - it doesn't get better than that.

Rahrrr! Nice tree trip, love the improvisation. I wasn't quite sure if the MADSEN would work as well as the long low xtracycle racks either, so we went for the wide load version of what you very nicely accomplished in the bak.

Next year someone'll just get have to get crazy multimodal on us all, and take train/bus/cab/hitch with a folding bike plus trailer and go cut a tree by bike.

Oh my god, that is so cool...and beautiful...I'm actually a little weepy (maybe the early hour). I hope that's your Christmas card pic!

the family shots are adorable! Plenty of material for a family christmas card photo right there!

I love carrying big bulky things on my bike- It gives me a feeling of accomplishment that is not entirely justified, but fun nonetheless.

I just sent you an email. I SAW ONE!!! I was driving to the grocery and I saw a guy on a Bakfiets pull out of the parking lot. I pulled over and accosted him. He lives in the next town over and he's going to let me come over and try riding it. He has triplet toddlers he bikes in it.

On the seventh day of Cargomas, my cargo bike hauled for me,

Cheers, to you and your family, Sara!