We couldn't agree more. We just see our city so much more now that we are bicycling around it. We notice and point out and discuss and wave and connect.

However, it's not all pretty.

After feeling great stopping by the Bicycle Appreciation Breakfast at Yale (B.A.B.Y.) this morning, C, S, and I saddled up again, rushing a bit to get to school on time.  The boys decided to play a travel game called "Cupcake." One person designates an objects he sees repeatedly along the route as a "Cupcake" and without telling the others just what this specific thing is, he calls out "Cupcake!" every time he sees it. The other folks need to make guesses as to just what "Cupcake" really is.  Enthusiastically calling out from the longtail, the boys went back and forth, designating street signs and flowers and pedestrians as "Cupcakes."   Finally, along our final stretch, S picked out the last "Cupcake" object.

Finally, all out of guesses, C and I asked S to reveal just what his "Cupcake" was.

S, pleased that he had stumped us, replied, "Oh, Cupcake is trash thrown on the ground."
Posted by sara 1 comment:

It was a rainy, rainy week here in the Haven which thrilled our youngest because all this precipitation caused the sugar snap pea he planted to sprout. The rest of us, however, were feeling a bit gloomy and boxed in and were itchin' for time outside. Despite not enough bike riding this week, we did end up with a list of things that made us smile.
1. A local family emailed me about their search for their perfect family cargo bike. They will be coming over this weekend to test out our two longtails, the Xtracycle Radish and the Yuba Mundo.
2. I received these in the mail yesterday. So wonderful to read Elly Blue's zines focusing on women and bikes. 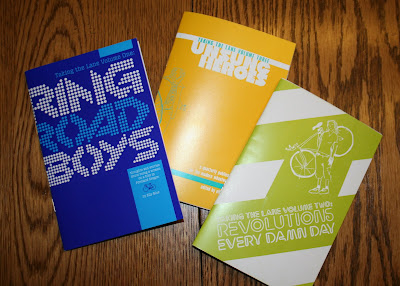 3. My friend V called me at work to ask a question about our Xtra since they had just purchased a new Xtracycle Radish to go along with their Madsen. Knowing other families with multiple cargo bikes makes me feel less nutty about our bike fleet. I look forward to comparing the new version of the Radish to ours. I already know that I am envious of the lower top tube...
4. Anne from CarFree Days sent me this photo. So cool to think of my handmade t-shirt participating in this rockin' Bike-to-School event in Seattle. 185+ riders and doughnuts. Amazing. It's time to do some family-bike organizing locally. See more photos from the event here. 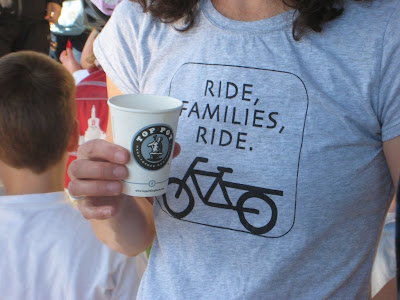 5. The sun came out this afternoon and we headed out on the bikes for a spring Friday evening loop: dessert first at Ashley's, then off to Modern to pick up the boys' pizza (or is that apizza?), a stop at Caffe Bravo for some eggplant rollatini for the grown-ups, and finally, a swing by The Wine Thief. It was one of those evenings that just makes us so happy to live where we do.
Now that we've pretty much decided to keep the bakfiets, we've been taking it out more and more. If we ride with just one kid in it (given how big they've all grown), it works out great and there's still plenty o' room for our purchases. The boys love riding in the box bike and we are constantly overseeing negotiations as to whose turn it is to hang in the baks. 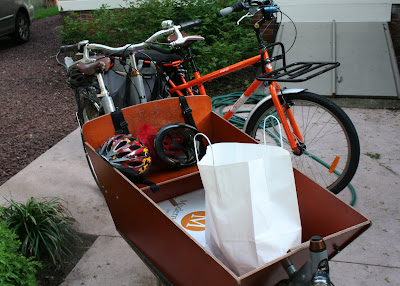 Remember this, this, and this? Stay tuned for a new look soon....
Posted by sara 5 comments:

This weekend's New York Times Book Review has a quick feature in the Children's Book section called Bookshelf: Wheels that features kids' books, four of which are about BIKES.
I am especially excited about this one: 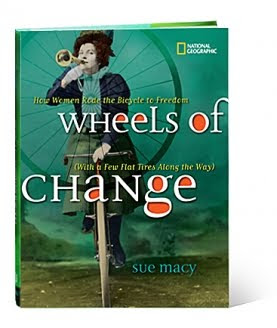 Wheels of Change: How Women Rode the Bicycle to Freedom (With a Few Flat Tires Along the Way) by Sue Macy.

Today, I came across photos of another talented British actress riding a different cargo trike. Shout out to Helena Bonham Carter for not only being a woman who seems comfortable doing her own thing, but also for being a momma who rides a cargo bike. 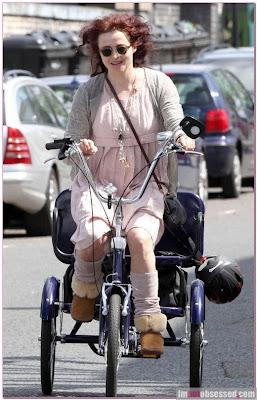 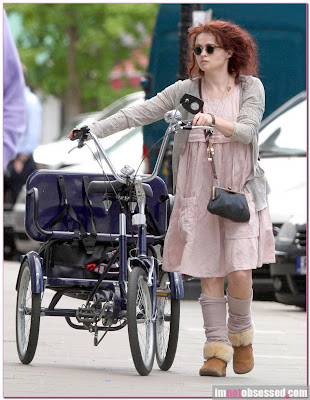 Last weekend we participated in our third Rock to Rock ride, an annual event to raise money for local non-profits, many focused on environmental education. We had so much fun on the past rides, we convinced lots of friends to join us for this great event, riding across the city from West Rock to East Rock..

It was so inspiring to see the numbers of people who turned out for Rock to Rock. It was also very affirming to see so many families participating and yes, there were multiple cargo bikes!

As the ride takes over the city streets with police on motorcycles stopping car traffic at intersections, it felt so freeing to ride along, chatting with friends, watching C & S on their own bikes cruising along. As the boys pedaled happily, it highlighted the fact that they are extremely capable cyclists and the issue of my sons being unable to ride for transportation here in New Haven is not about the mileage-- all told, they rode 15 miles that day-- but it is clearly about a lack of bicycling infrastructure and far too many impatient car drivers in our midst. So we continue to haul them on our various cargo bike set-ups so we can get to school and go shopping and go off to music lessons, but darn, how I wish the older guys could ride on their own. But it's just not safe. Not yet, anyway.

Our friend Domingo Medina, a Yuba rider, joined us at Rock to Rock with his camera. He took loads of wonderful photos, many that I include here. But if you want to see all his snaps of this great bikey-ness (and not just of my crew), you should check them out here.

I didn't pull off making our own shirts this go-around, so each of us chose a bike-themed tee for the ride. Needless to say, this was no problem in our house as I seem to have a slight obsession (oxymoronic?) with finding or making bike t-shirts. 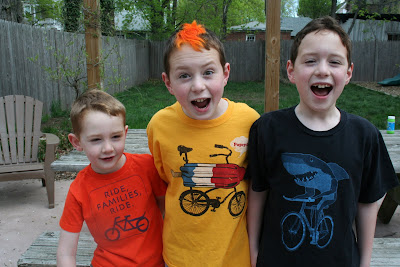 A group of friends gathered at our home and then we rode over to Common Ground together. Here we are setting up for the ride. There we so many riders, we waited for all to line up in front of us so we could ride in the back. You can't see it here but we started with two Xtracycles, one Madsen, one Dutch bakfiets, and two Yubas. We were joined later in the ride by two more Xtras and ran into another Yuba. 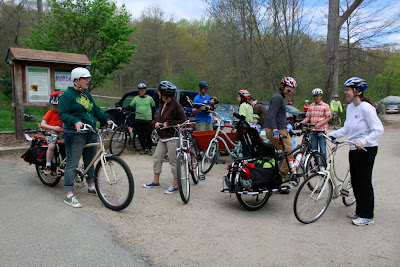 P rode with our friend J. 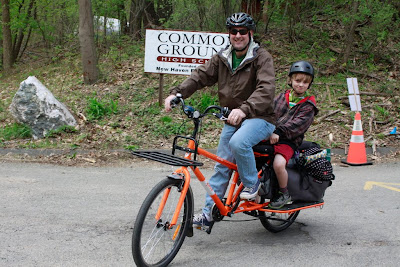 J's dad rode our bakiets with his two-year-old twins, Q & S. I rode the Xtra Radish with F on the back. We also towed F's bike with the front wheel strapped in our Freeloader bag. F really wanted to ride himself but the mileage was too much for him to complete the whole ride so we took it along for later.... 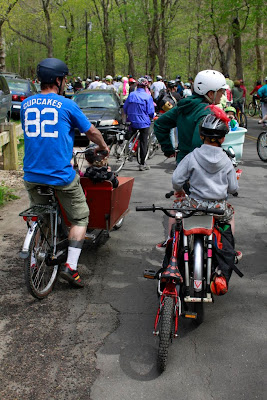 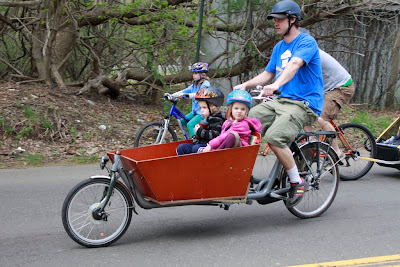 We love having photos of S & C riding themselves. 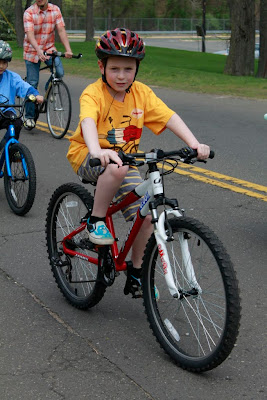 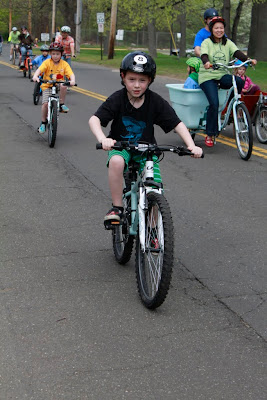 It was great fun to run into this family on their Xtra. We had met C in the fall when he stopped us while riding home with the kids. He was moving to town and wanted to hear about other family bike riders. Well, they live here now and look at this awesome set-up! Welcome to New Haven. 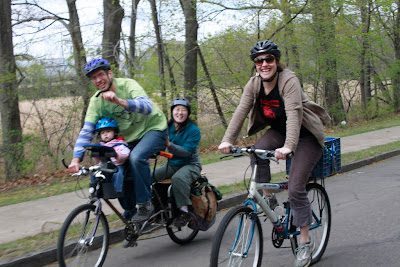 This is one of my favorite shots Domingo captured, F and I cruising into Edgewood Park, trees a'bloom. 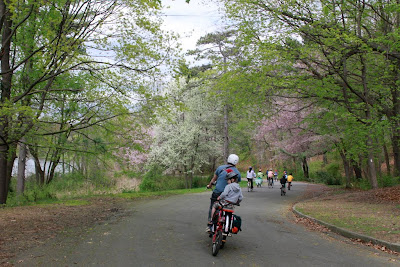 When we reached the final stretch of the route, F and I pulled over so we could take his bike out so he could finish the ride on his own. By the time we got him up and going, we were the very last riders, with only the two wonderful support volunteers cyclists behind us and the support vehicles. F pedaled furiously, commenting with amazement that this was the first time he ever rode on the street. He wobbled a bit and had to put his feet down. He was having a rough go starting off himself so a few times, I hopped off my bike, pushed down the kickstand, ran to him and gave him a push-off, and jumped back on the Xtra. He was determined though to get to the end of the ride by his own pedal-power and just kept riding. On the final block, he even got his very own police escort who cheered him along saying, "Come on, buddy. You can do it!" 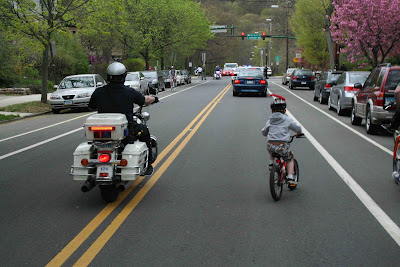 He reached East Rock Park to great cheering as many of the volunteers lined the path, clapping and calling out. The police escorts kindly joined in. This was one proud little guy. 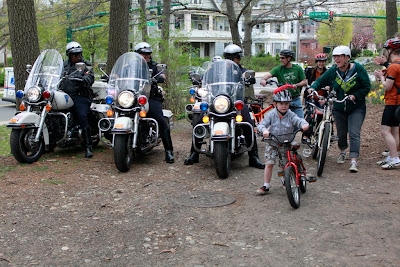