Nothing to See Here, Folks. Move Along.... 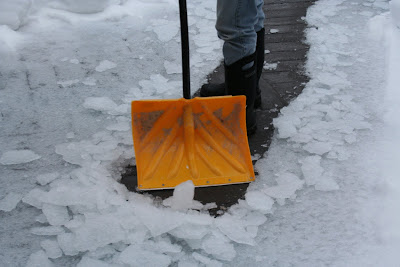 We have hardly been on our bikes. And it is depressing. Last winter there were only two weeks where we could not ride at all. We commuted by bike to school throughout much of the winter, with happily protected ears thanks to our Bern winter helmets, and happily protected eyes thanks to the addition of cool orange-hued ski googles.
But this winter has been a different story. We have gotten hammered by wintery weather. There have been an unprecedented EIGHT snow days. New Haven has had nowhere to put the snow so there are crazy, high snow banks and very, very narrow roads. And we just have not been riding. And it has not been good for my mood.
Twice. That's it. In the month of January, we were only out on our bikes two times. I was insistent that we ride on New Year's Day. It was a cold, blustery day but for almost purely symbolic reasons, I felt it most important that we HAD to get on our bikes on the first day of 2011. We had to set the tone for the rest of the year. We took a loop up around near our friend's house. It felt good to pump the legs, to breathe in the cold air. It was a positive sign when a family out walking watched us ride by and shouted out, "Hey, an Xtracycle!" We gave them a wave, feeling good, feeling free.
Last Sunday, the sun was out. The snow was still piled high. The roads were still narrow. But the ice had not yet come so I took advantage of less car commuting traffic and took my youngest fellow to his friend's house by bike. It felt good. 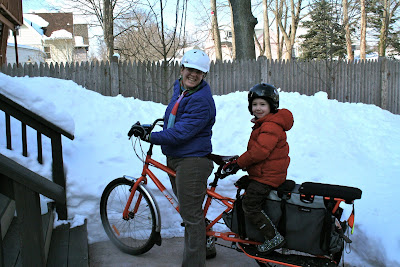 But there has been too little riding. So there has been no blogging going on. I feel like saying, "Nothing to see here, folks. Just move along."
Hoping the weather turns. Hoping the ice melts and the snow lessens. Hoping to get back to everyday biking. And when we do, we'll surely have adventures. And then, we'll have something to blog about.
Posted by sara 8 comments: