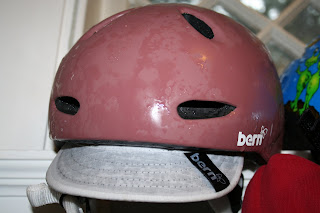 a bit of rain must fall. But, that's quite alright because we had such rockin' spring weather last week for our April break that these past two days of rain showers were not overly bothersome. We reattached the weather tent and went about bike commuting anyway. Riding home today in a full-on rainstorm did put the weather tent to the test. I am happy to report that it worked-- kept those boys inside dry. I, on the other hand, was completely soaked which would have been problematic if I had been traveling to work in the storm. Instead, it wasn't a big deal to just change out of my soaking wet work clothes once we arrived back at home.

I do have to give props out to my new Bern helmet with its what-I-originally-thought-was-a-silly-looking visor attachment but I have to say that it helped a ton with keeping some of the rain off my eyeglasses. Originally, I tried to order this, but for the life of me, I couldn't get one to fit. It was my version of Goldilocks--the medium too small, the large too big-- but without the 'just right' which bummed me out because I thought it would be fun to ride around with a polka dotted helmet. Oh well, the Bern is serving me well.
Going back to work has been a bit challenging because C, S, and I had such a great week off together. I realized while pedaling home through the rainstorm today that it has been exactly one week since I last drove the car. Cool-- an entire week of doing everything by bike! We were so fortunate to have wonderful weather last week that for a number of days of the vacation, we simply took the bakfiets out in the morning and just stayed out all day, experiencing numerous unplanned adventures around New Haven. I never had to worry about where we would park or if we had enough quarters for the meters, so we could just follow our fancy and hit any place we liked. We visited a number of different playgrounds around the city, ate lunch at two different delis, joined in Elm City Cycling's Bike to Work Breakfast (meeting all sorts of neat New Haven cyclists and letting folks take the baks for a spin), came upon friends playing street hockey and joined in, hit Wooster Square Park for the Cherry Blossom Festival, rode down to Yale's main dining hall so the boys could have lunch there (and use up P's points on his meal card before he graduates), and so on.

One of our adventures last week is a bit embarrassing to admit to as we hit the main branch of the library downtown for the very first time. We are big readers and do love libraries, but for the year-and-a-half we have lived here, we have been going to two libraries in the next town over because-- get this-- it is easy to park at those branches. Ahhhh. The city's downtown library is in a busy section of town, hard to find parking, so in the past I would always just pack up the guys in the car and head north. When folks ask about what we paid for the bakfiets (and quite a few folks, friends and strangers alike, do ask), I always say that the only buyer's remorse I have is that I didn't learn of this incredible bicycle sooner. When I think of the fact that when I was home with F full-time last year, we would head off to the library at least once a week and what adventures we could have had on the baks...

I guess I am becoming well-known around town as 'that woman on that bike' because I had a number of people at school comment about seeing me out and about last week. We had friends come find us at the weekend park festival, saying, "We knew you were here because we saw your bike!" While it's been fun to have such a distinctive vehicle, I do hope that some of the folks who have inquired about our family bike join in the fun. I am dreaming of a fleet of family and cargo bikes in New Haven!

Some of my favorite shots from last week: 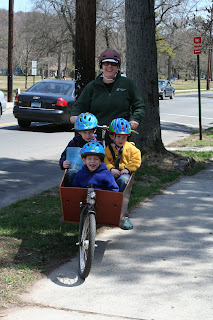 Hey, that's me! The first snap of me 'behind the wheel' as I am the one usually behind the camera. 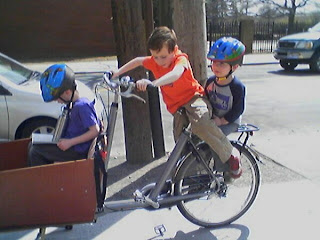 Love the four-point kickstand! As P was getting a small problem on his bike fixed at our local bike shop, the boys stayed busy outside. Although, I do have to say that going to the bike shop with kids is one of the easiest stores to be in with little ones as the folks who work there do not at all mind three busy boys with curious minds, active hands, and loads of questions..... 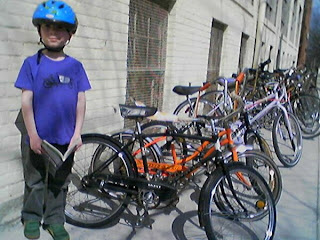 We spotted this cool kid's Raleigh that reminded the boys of their dad's Rudge. 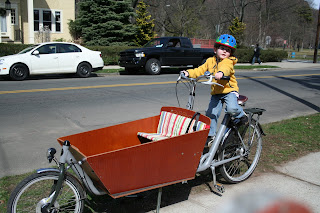 F is getting into the biking spirit. Again-- major thumbs up to the four-point kickstand that turns the bike into a portable jungle gym! 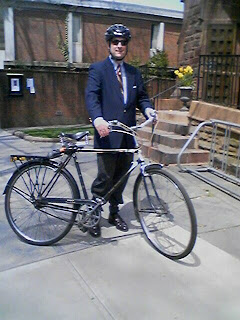 I just had to capture this image of P on his way home from work all dapper next to his dapper 1968 Rudge. We have always thought he should have attended university in England... 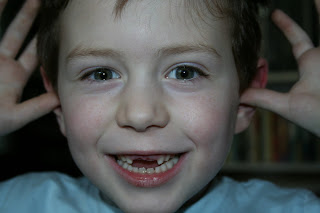 And we couldn't miss the opportunity to show the grandparents S's new smile!

That helmet you tried to order is the bomb...and the Rudge is great too! I might actually take paints to my regular bike helment.

Any chance you can polka-dot accessorize your helmet yourself? Given your very amazing t-shirt skills, I bet you can do it! Thanks for sharing the great photos, am still giggling over P's pic!

You are going to lead a New Haven biking revolution! I'm so proud of you.