A day out on the bike

It was a great spring break day. The sun was out and the temperature warm enough to don fleece and leave the parkas at home. We left the apartment at 9:15 this morning and didn't return until 4:45PM. Going out by bakfiets just brought a freedom that the car never could have. I didn't have to worry about going downtown and just where to park so we could make a variety of stops with no worries about open spaces and searching for quarters. We started at a new playground in a different part of town, headed over to Katz's Deli for lunch, hit the movies across the street, stopped at the yarn store to visit a friend, had an afternoon snack of donuts, went to pick up little brother, and cruised home feeling the wind in our faces as we put the brakes to test going down the steepest hill in the neighborhood.

All throughout the day, we interacted with a number of folks we would not have if we were not biking. The boys waved to passerbys who commented aloud about the bike. We talked to a delivery guy on a scooter who thought his restaurant should go for a bakfiets. A mama with two young kids asked if she could take a photo, thinking that such a cargo bike would serve her family well. A construction worker stopped in the middle of the street, cell phone attached to his ear, to say to the person on the other end of the phone, "You should see this bike. It's built like a boat!" A dad and son looked out the window of a bus, pointing and laughing, and when I smiled in return, I got a head nod of approval.

Throughout the day, we saw loads of folks out on their bikes and I couldn't help but gawk at their bikes, their helmets, their baskets, buckets, panniers, or milk crates, their biking style. And of course, I didn't bring my camera but I made use of the one on my very basic cellphone (that I haven't used much) to capture a few moments of this memorable day. 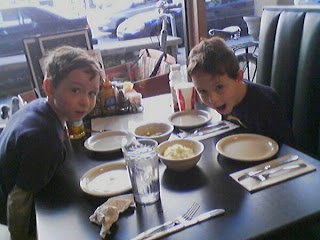 A shot in the deli, baks parked outside. 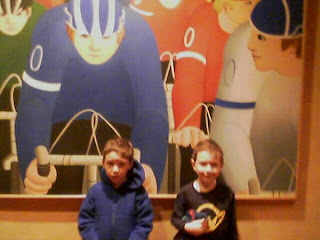 Now that we're biking, we suddenly notice bike-themed things we never seemed to see before. Here's a large painting from inside the movie theater. 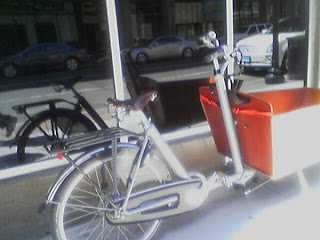 If only, I had my good camera. We left the cinema and I could not help but notice how gorgeous the bakfiets looked, reflected in the window, especially juxtaposed to the cars.
Posted by sara

Great photos! Looks like you and the guys are having a great spring break.

So much fun, what a great spring break!

I get the feeling a Baks is an extrovert's bike--wonder if they make a camoflage one for less social folks?