It's happening, folks. I see it and feel it coming on. The whispers are getting louder. Momentum is building.
Two and a half ago I began my obsessive reading of family bike blogs, looking for information, for community. I drooled over family bike events chronicled on Portland, OR bike blogs, on Seattle-based ones. I researched bakfiets dealers and owners, emailing them directly, asking their advice. I couldn't find much East Coast presence, save one lovely, bakfiets-owning, blogging mama in Massachusetts.
And then, two years ago, we bought our bakfiets. Had it shipped from Clever Cycles in PDX, feeling a bit guilty about all the gas it took to get it to us, but beyond excited by its arrival.
We started riding. We started noticing bikes with kids' bike seats attached, and sometimes a bike trailer, even some tag-alongs.
Then the two of us started jockeying over who got to ride the baks and who had to take the car. So we invested in an Xtracycle so we could both ferry kids by bike and leave the car parked for days and days.
People stopped and asked about our cargo bikes. Friends bought a Madsen. Our local bike store became Madsen dealer. We watched an Xtra with two kids perched on the snapdeck go by our home.
A year later, another set of friends bought a Joe Bike box bike.
People were talking. Conversations about kids as cargo-on-bikes became more frequent. A family on a bright blue Yuba Mundo rode up to school.
The boys grew bigger and heavier. The bakfiets could no longer hold three FullHands boys. Alternatives were researched. An orange Yuba Mundo joined the party. Friends got us in contact with another family researching cargo bikes and another orange Mundo appeared on the local streets.
Last Saturday, we joined a local clean-up day. We arrived on two longtails. Another family rode up on theirs. A third family stopped us, sharing that they had just been at Devil's Gear researching cargo bikes and ran into one of our neighbors, now proud owners of a Big Dummy Xtra.
On Sunday, at the farmer's market, a number of folks commented on our bikes, some asking for more details. We met another local Xtra-owning family. Later, at the annual Cherry Blossom Festival, there were few cherry blossoms (too cold!) but suddenly tons of bikes were blooming all around us.
One highlight of the Festival was meeting another local family and seeing their new Taga Bike, fitted with two child seats. It was a delight to speak with V and most fun to step back and watch as curious festival-goer after curious festival-goer stopped to ask her about her cool trike. (Darn, total camera fail as I asked permission to snap a photo of her wonderful bike with two sleeping kids strapped in but cannot find the picture in my phone. Ugh.)
Finally, a friend met us at the Cherry Blossom Festival, enjoying a brief respite from caring for barfing kids. She had walked to Wooster Square and we invited her back to our house for some backyard hanging and beer drinking. Good thing for the two longtails as we had an extra seat! C was game and hopped on the back of the Yuba with one of the boys. When we reached our house, C gave the two longtails test rides and decided that an Xtracycle Radish just might be just what she is looking for. Later that evening, I took her home. For a brief moment, I was tempted to hop the car as it had been a long day and there would be a hill involved. But we decided to keep it a truly car-free weekend so set off via Yuba once again and it was fun. 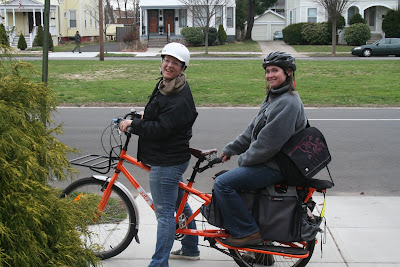 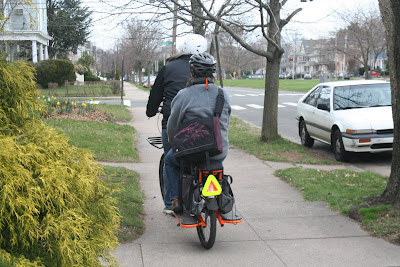 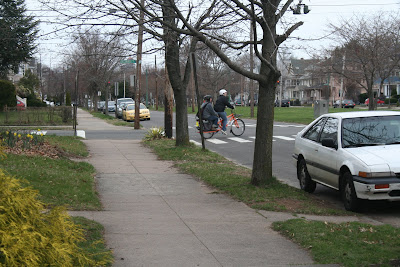 And just this week, another local family who found this blog reached out to Facebook friends looking for us-- they did!-- to ask about our cargo bikes as they researched possibilities for their family of five. Yes, momentum is building. As more local families discover cargo bike options, as more parents transport their kids on two-wheels (and three!), as others witness this and think they too may give family bike riding a try someday, we all will benefit. And yes, looks like it time for some serious bikey family fun event here our city. 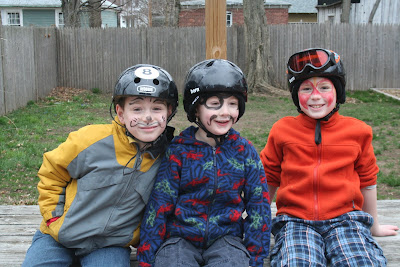 The boys sportin' some sweet face paint with their helmets. And no, just because, C's face is painted as a cat, doesn't mean he IS a cat. And if you don't know what I'm taking about,
you must go here and watch this now.
Posted by sara

Yeah, go cargo bikes in New Haven!
Is that Edgewood Ave in the photos?

Nice! I'm still trying to figure out the 30th. It might be to crazy though to get down and the bike. We might come and hang in east rock though. We need a nh fix.

Heyyyyyyy sara? whats with all the helmets???? does the government have some kind of crazy helmet law where you live?????????????

@Anonymous-- CT law mandates that children under 16 must wear a helmet so our kids always wear helmets. My husband & I both make the choice to do so as well. However, we don't make judgments about other adult cyclists who choose not to wear helmets.

Heyyyyy anonymous? Most states in the United States have a mandatory helmet law for children. What's with all the question marks???????(

Sara - I just spent an hour (ok, maybe more!) cruising around Full Hands and Totcycle (which you sent me to, thank you!). Indeed my friend, Momentum is happening :) Because of YOU and the little (but now more) I know about your cycling adventures...I'm considering a cargo bike. In the last week I've been testing out toting my tots around in an attached seat and Burley, our current bike setup. I am so happy to tell you that I am falling back in love with something I hadn't done much of since Peace Corps - bike! I biked everywhere back then. Everywhere. Including wearing strappy shoes on my way to our regular Friday night Salsa and Punta dancing extravaganzas :) Oh, those were the days! But here I am, MANY years later and have slightly different accessories - two lovely kiddos. Thank you for inspiring me to rediscover something I loved long ago, and to share it with those that I love now.