I was excited to read about Dottie and Trisha's Summer Games over at Let's Go Ride a Bike and decided that, of course, the five of us would participate. This first series of challenges look like this:

I can happily report that we've already completed a few of these items on the challenge list. It's been lots of bikey fun around here lately. I haven't yet written about our new commutes now that we are in our new home. A lot of local folks ask if we are still riding since we are further away from work/schools and I am happy to report that the answer is a resounding yes. Both P and I are riding daily. Before, P could walk our youngest to school but now cycles with F each morning to preschool on the Xtra, which F has dubbed "The Rocket Bike." I am still on the bakfiets with the twins, but our ride is about double what it was from our apartment and it goes through a far more-trafficked route. I realize that I am full-out city commuting now and recognize that I benefitted from riding for over a year before we moved to this neighborhood. I suspect I may have been far more intimidated to take on bike commuting if we had started over here when we first moved to New Haven.

A huge advantage of our new location is that we are closer to a number of friends. I am not sure what constitutes a 'group ride,' but we now have our own little bike bus a few days a week as our friends with the Madsen have joined us riding to school a couple of times this past week and plan to do it regularly this spring, and we rode together to music lessons on Saturdays since we've been in the 'hood. It's been a delight to ride along with them, especially when M rides the Madsen in front of us with her son, O, facing backwards as I pedal behind them with my guys facing O! The boys wave, call out, laugh, and give each other high fives when we reach red lights. We've always been quite a spectacle around town before, but as we link up and ride together-- it makes us that much more of an rolling attraction, and we all do a lot of waving to kids in school buses and folks walking on the sidewalks. 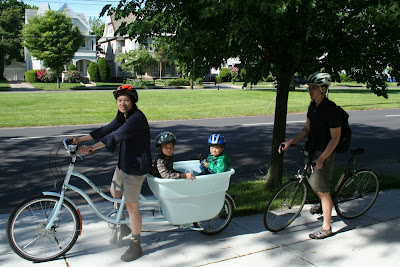 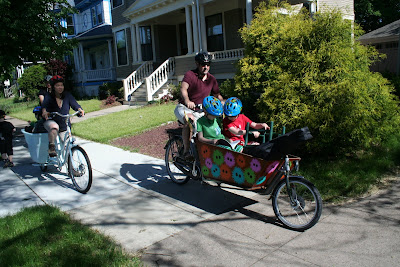 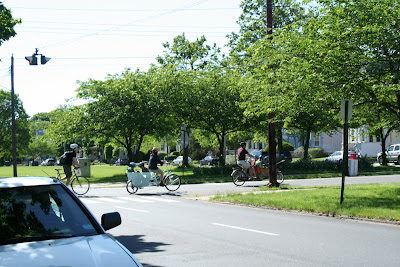 We were able to hit the monthly "Bike to Work" breakfast yesterday since we now ride close to city hall where Elm City Cycling sets up and hands out free coffee, juice, and food for all cyclists who stop by. One interesting note is that our stop caused a bit of a stir with friends at school who had driven past us in the first part of our commute but hadn't realize we had stopped for the breakfast. When we rode up to school 20 or so minutes after our normal arrival time, we were greeted by an anxious parent who was convinced that we somehow had gotten in trouble along the way. She and another parent had compared times and locations where they spotted us and wondered together why we weren't at school yet. Our bikes make us very noticeable! While I found their concern quite sweet, I couldn't help but wonder if they would have been equally anxious for our arrival had they passed us while we were out in our minivan and didn't arrive at school at the expected time. Just a thought with no judgment or conclusion, there.

Then yesterday, we agreed to take two friends with us after school who live a few blocks away. Their mom dropped off their bike helmets and P rode over to our school at 3:00pm. All four kiddos strapped on their helmets and we divided and conquered: two on the Baks and two on the Xtra. We rode across town to a playground where I stayed with the four and P rode off to pick up our youngest at his school. After they returned and F got his time on the much-loved tire swing, we loaded ALL FIVE kids in the two bikes and hit our favorite local ice cream shop. Riding home with the crew after cones, I felt lucky that we have friends who trust us to ride their kids. Our new passengers were big fans, and it made me think that we should keep an extra set of helmets around-- just like having extra booster seats in the trunk of our car-- so we can invite a friend or two along on other impromptu adventures. 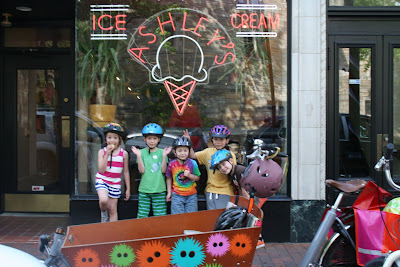 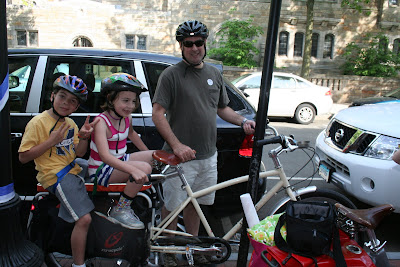 While our buddies rode in the bakfiets for part of the afternoon, they were both eager to try out the Xtra. I rode with our three boys in the Baks & it was fun to ride behind these guys watching the kids' maiden voyage and feeling lucky that their parents trust us.

Finally, this morning on the way to the farmer's market, we met another new neighbor who rode up next to us on his bike (at a red light, I must point out). Paul is car-free and we've seen him a bunch of times running along our block. One time he called out from the sidewalk, "Hey, I like your bikes!" as he jogged on by. It was nice to put a name to the compliment and it was cool to learn that he is car-free and looking for a good family ride set-up so he can eventually get out on a bike with his young son. When he learned that we had moved out of our old neighborhood-- a place he recognized had more daily bike commuters-- he commented that he was glad we were over on his side of town since he felt it important that more bikey folks "colonize" this part of the city.

Later in the afternoon, we rode over to Open Farm Day at Common Ground, one of our favorite spots in New Haven, to hang with the chickens and goats, meet up with friends, watch sheep get sheared, and practice our hula-hooping skills. We always get an awesome reception at Common Ground when we pull up on our family bikes, and we were jazzed to see some of the high school students making mango and kale smoothies using their brand-new bike blender Xtracylce rig. P made some mention of Gilligan's Island that went way over our guys' heads. We think it may be time to add some of those shows to our Netflix queue. Too bad we couldn't convince the boys to give the smoothies a try....

I was thinking of bringing my bike up when I visit in June. Maybe that would fit in the category of biking with "(extended) family!"

Awesome! A school bike bus definitely counts as a group ride. Your crew did pretty much every challenge in a week of normal living :)

This is so awesome! I am sad to say that I don't think I will be able to take ANY pictures of me cargo biking it with kids to school with ANYBODY I know. Not in this lifetime. Even my eco friends are all pedestrians, not cyclists:)

But who knows. Maybe as Dexter grows I'll meet another cycling mommy or daddy. They will probably have a bike trailer though, not a cargo bike.

hi, you have nice blog.. u can view also mine..http://akoniwares.blogspot.com

Okay I love it! How fun.