that's us!
A rare shot (the only shot?) of the whole family...
_____________________________________
Update:  I emailed the reporter and she kindly sent me these photos below.  I gotta say that F is looking particularly cute on the back of the Xtracycle and yes, S is looking awfully pissed.   He wasn't that into the Bike-To-Work Breakfast that day--  perhaps for its lack of chocolate munchkins.
I also need to comment on one of the comments on the New Haven Independent's small article that accompanied the photo.  We know we are not allowed to ride on sidewalks.  We are hyper-aware of the bike laws in New Haven and try to be ever-vigilant about always following them. We want to make this area ever-more bike friendly and safe so we believe that we must do our part by being law-abiding and courteous cyclists.   We often have one, two, or three passengers on our bikes that we are most interested in keeping safe so follow all laws closely. We were simply on the sidewalk for the photo and as the breakfast was held on the sidewalk in front of City Hall, we had to saddle up somewhere.
OK, I'll stop now.  I didn't bother saying that on the actual New Haven Independent's website comments but hey, I said it here.  I tend to get worked up when I read all the nasty back-and-forth comments readers of that online paper seem to generate.  Of course, I always to continue to read the comments which I should just stop doing, especially on the bicycle articles that always get down-and-dirty comments between annoyed motorists and intense cyclists.  Interesting article by "The Ethicist" in the NYTimes about anonymous blogger comments that you might be interested in checking out. 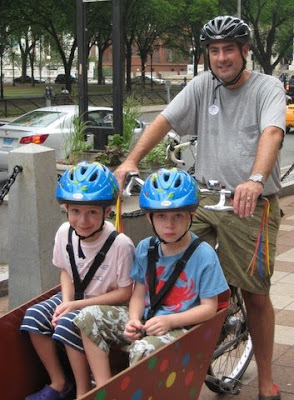 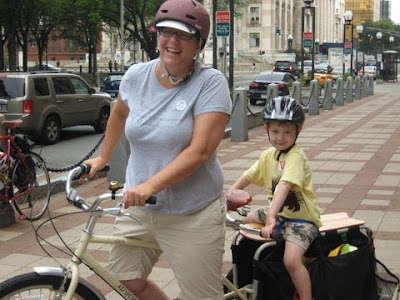 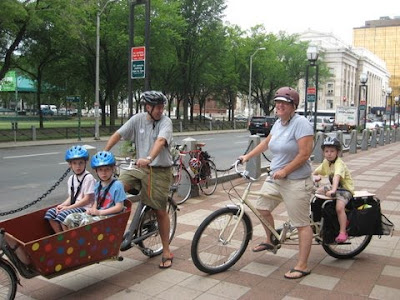 I was tempted to post a comment after I read that poster's nasty comment on the New Haven Register website. As an avid reader of the comment sections on articles on the NYTimes, I am aware that people are very comfortable letting loose when they have the opportunity on newspaper websites.

In DC we can ride on the sidewalks unless we are in the downtown area. I do try and mix it up; and when I am on the sidewalk am very mindful of not blowing by people and trying to politely give them notice that I am near them. I hate being a pedestrian who is intimidated by bicyclists on sidewalks, but I do feel somewhat anxious on my bike in traffic on DC city streets so sometimes I resort to the sidewalk.

I'm glad that the New Haven paper publicized the events and had good photos of all of you. Keep up the good work! And phooey on that negative commenter!

On the sidewalk comment, its funny bc if you are on the sidewalk people say "get off the sidwalk" and if you are in the road they yell, "get off the road". You can't win. All we can do is just obey the law, be safe, have a good attitude and ignore those jerks. Only jerks post mean things anonymously anyway. :-)

PS I've been pleasantly surprised at my good experiences this summer riding my bike in DC with both automobiles and pedestrians.

You all look great. If it makes you feel any better, I find the the comments section of our local paper seems to draw only the lowest of the low...better off ignoring them.

Great pictures. There should be 3 sections on streets- 1 for bikers, 1 for cars, and one for pedestrians. Hard to mix all three. I found your blog while searching for the best information on biking. I think your blog is very helpful and believe that you could reach even more people if you joined Wellsphere's HealthBlogger Network (HBN). The HBN is comprised of over 2,600 of the web's best health writers and their content is read by over 6 million visitors a month at Wellsphere.com.

For more information about joining, please visit http://www.wellsphere.com/health-blogger or email me at hua [at] wellsphere [dot] com.