as bad weather, only inappropriate clothing" or so says the quotation I just Googled to see is attributed to one Sir Ranulph Fiennes.  Since I heard that some years ago, I've always liked that saying, although I do believe that yes, there is a such thing as bad weather, just perhaps less of it than we may complain about.


So when it was time to head out yesterday with the morning temperature still below freezing, we were faced with the question you car-free folks don't have-- Should we take the car or the bikes?  It was not much of a debate as the air was clean and crisp, the roads were clear, and we had plenty of time to make sure we were wearing well, appropriate clothing.


I contain to maintain that the best winter bike purchases we made were Bern helmets with fuzzy inserts for all the boys and a pair of ski goggles for each. 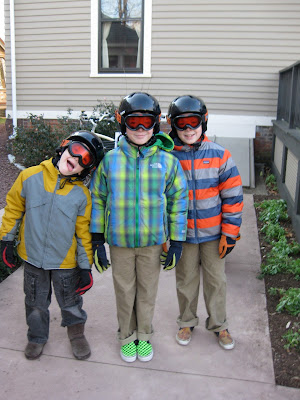 We snapped some photos on our way to church. 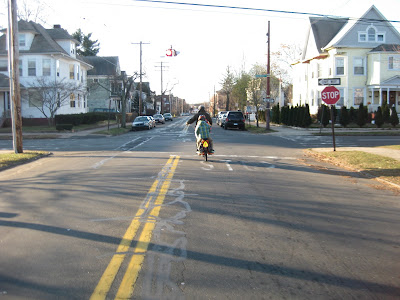 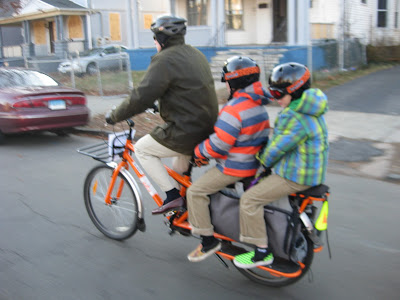 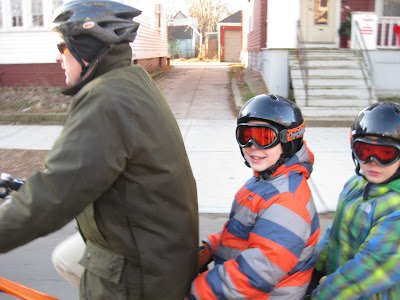 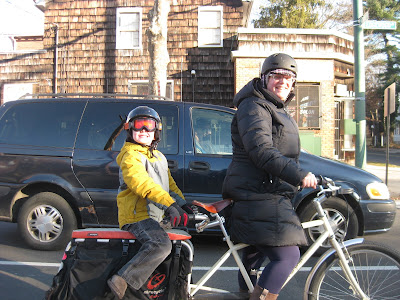 When we arrived, we were greeted by a lovely Jamis commuter, letting us know we were not the only ones to cycle there this morning.


And here: a lone wheel locked to the rack. Did someone U-lock the wheel, and not the frame, and have the rest of the bike stolen?  Sad to consider. 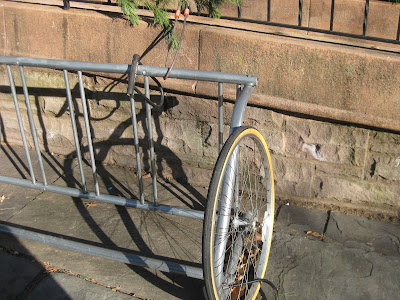 We stopped at the grocery store on the way home where the boys asked to stay outside, playing with the camera, making faces at their reflection, and introducing a stow-away stuffed lemur, R.T., to the joys of cold weather. 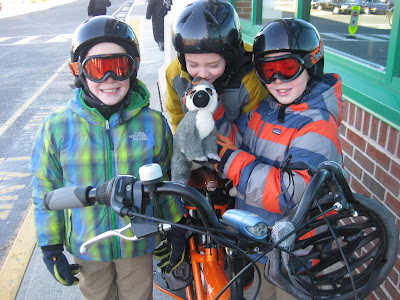 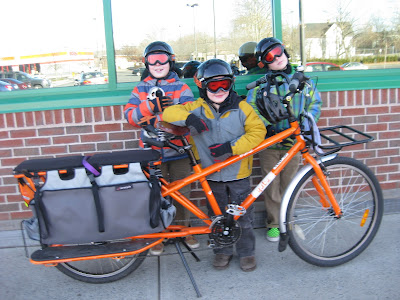 Later friends came over for a soup lunch.  They headed home on their bikes, their Xtracycle Freeloaders laden with cut wood from our large backyard pile. 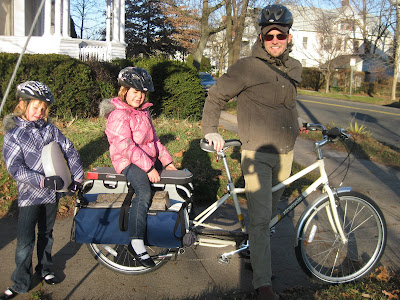 It's a rare day we ever regret choosing the bike.
Posted by sara

Yay! It was super cold out yesterday too! We just invested in ski helmets for the kids and I claimed them winter bike helmets as well. I got myself one today too.

I think you all need some wool/silk blend long johns for winter biking. I love mine lots, though they mostly keep me warm in our very cold office.

What a fun day. That happens around here too. We have a car so sometimes we decide whether to take the bikes or the car. Like you, we are always grateful when we choose bikes!

The boys look awesome in their winter gear!