"It's the People that You Meet

when you're riding down the street, it's the people that you meet each day!"

With apologies to the tunemakers of Sesame Street, I couldn't help but alter this line from "Who are the People in Your Neighborhood?" when thinking about my latest post. Anyone who spends time on a bike probably has a long list of why s/he rides. I know I do. I can talk about the fun, the easier parking, the savings on gas, lessening my carbon footprint, getting exercise, modeling a good habit to my kids, and on and on.

One advantage of bike commuting that I didn't anticipate, however, has been meeting a number of interesting individuals in the past eight months, people I don't think I would have met if I weren't riding a bike or paying close attention to the bikes they were riding. Yes, I have 'met' some of you out there virtually as we share a passion for city cycling or cargo bikes or family cycling and I do so love reading your blogs. But in my every day life, too, I have crossed paths with people whom I was probably crossing paths with while driving in my car but perhaps didn't notice or have the opportunity to speak with before I began pedaling. And so, I would like post from time-to-time about folks I have met thanks to bikes and my new-found bike love....

Kerri was riding along Ocean Avenue on her much-loved and well-used Xtracycle when I was loitering on the sidewalk near the beach while on a short vacation in Bradley Beach, NJ. I couldn't help but get excited by her bike and I called out, "Hey, Xtracycle!" when Kerri heard me and actually turned around to say hello. While I was holding a squirming F, she and I got to chat just for a short bit and I heard some of her story. Kerri told me that she was surprised to hear someone randomly call out "Xtracycle" since she's had hers for years but hasn't run into too many other Xtra owners in her corner of the Jersey Shore.

It turns out that Kerri is hard-core committed to bikes, promoting cycling, and recycling used bikes. To that end, she runs TWO amazing nonprofits called The Bike Church and Second Life Bikes that serve various-aged kids from Asbury Park. Kids learn to ride, get lessons about bike safety, practice basic bike repair, and earn their very own bikes by putting in 'work hours' through her programs. Read about her mission and kids here and here. Ever-cool Kerri also has a pedal-powered blender rigged on the back of her xtra so kids can pedal their way to healthy smoothies using their own power. Love this!

I wish I had gotten the chance to check out Kerri's programs first-hand and when I am back down the Jersey Shore I hope I can. Meeting Kerri has inspired me to find out if my city has a similiar earn-a-bike program targeted for kids from low-income backgrounds. In the meantime, I am so thankful that our paths crossed and I send a big shout-out to Kerri for allowing me to write about her and for turning her bike around to stop and talk with the crazy woman who yelled out "Hey, Xtracycle!" as she rode by.

Check out the campaign here! 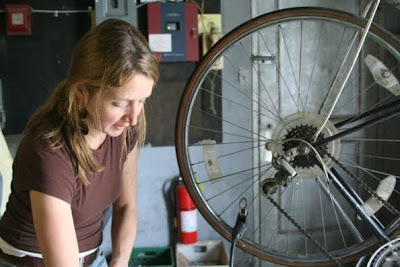 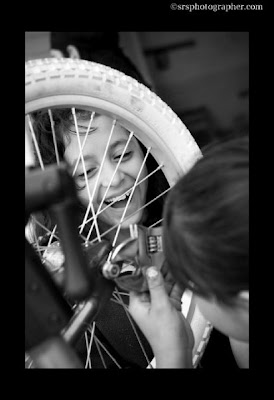 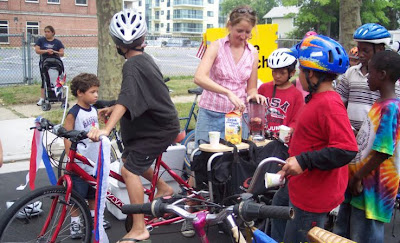 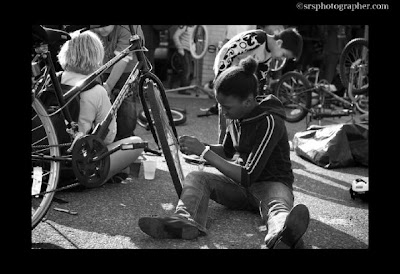 Meeting more interesting people certainly is a benefit of cycling. Kerri and her program sound awesome. How nice that you two got to meet randomly.

I totally agree with you. That's also one of the reasons Don and I pounced at the opportunity to move to the neighbourhood we now live in. Although our old neighbours were wonderful, our new 'hood has a unique vibe. Every time our friends come walk the dog with us we end up stopping to talk to people. It makes our friends jealous because some of them live in 'hoods where there's no love.

It is so interesting about XtraCycles - I hardly remember seeing any in Boston 2 years ago, but since having returned from Europe this summer it seems like an XtraCycle epidemic has broken out around these parts. Of course, in a good way. A couple of weeks ago we were in the parking lot of our usual grocery store, and there were like a half dozen families with XtraCycles loading them up with shopping bags, acting as if this was just part of their normal daily routine. Nice!

Very cool...but I think as an introvert, I'd have to ride around with a bag on my head.

"Bike church." I love it. I meet great people cycling around too, and also have gotten closer to the rhythms of nature on my route. Mushrooms are coming up and I've coined a term - velomycology!