Every Bike Has a Story

I am a big fan of memoirs, creative nonfiction essays, and documentaries. When I was teaching high school English, some of my favorite courses were the nonfiction electives I got to create and teach. I believe strongly in the idea that everyone has a story and our stories are often far more interesting than fictional ones.

My friend Dan posted this picture to his Facebook account and I immediately asked him if I could use it for my blog. It would be fun to make this "Every Bike Has a Story" a regular feature here, but let's see how it evolves. This is a photo of Dan's father-in-law's bike, taken in Cochabamba, Bolivia.


"[This photo] was taken 5 years ago (perhaps to the day - we were here for Santiago's 1st birthday, and he turns 6 a week from today). I think the bike has since been stolen. If not, it's at least been retired. Don Raul, then 80, used to ride it each day to the market, but the family convinced him to stop after a parked car door opened into him one day and sent him sprawling. He's recuperating from a broken hip right now after falling off a ladder in April (he's a tough 85-year-old), so his cycling days are behind him. The bottles are gone now, too -- my in-laws then had a tiendita in the house, but they've closed it." 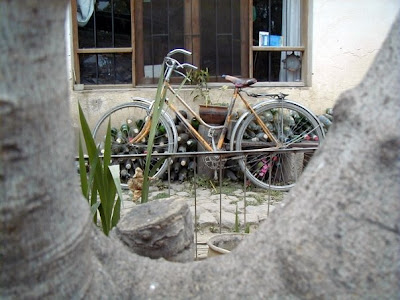 Oh, that is a very sad story on so many levels. The bicycle looks beautiful and I like the image of an 80 year old man lovingly riding it every day. I really hope that it was not stolen after all, but was simply moved somewhere for safe storage.

My vintage Raleigh Lady's Sports had a long and sad adventure as well, but its story has a happy ending (me!).