Despite a bit of begging, P and I have managed to hold off on the dog front. I did have a momentary waver on Friday when C befriended a local pup while we were enjoying the hot day with ice cream. It was clearly love at first sight on C's part and he immediately walked up to the owner and asked permission to pet her dog. For the next hour or so, it was clear that this gorgeous black and white creature had such a hold on my boy that he happily left his ice cream a number of times to sit on the ground, stroke its fur, and giggle each time this friendly canine offered its paw. However, we really don't have a dog life yet so, no, the new addition is not: 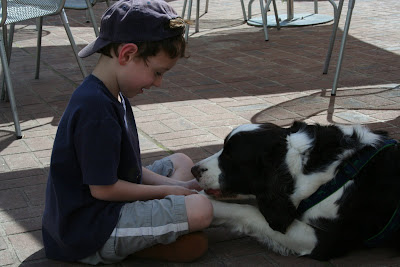 Instead, remember when I wrote this post about my upcoming 40th birthday? Well, I have yet to fill out the passport application, but on Sunday before P's graduation (go, P!), we hit our local bike shop and picked up: 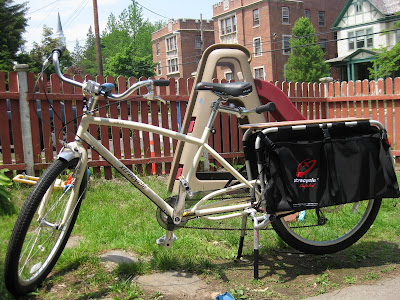 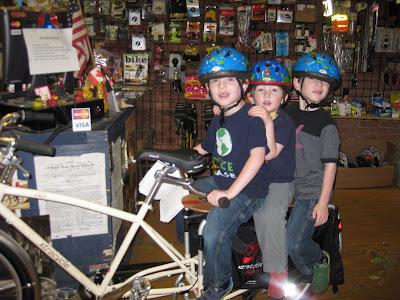 Before hitting the shop, P and I had this funny conversation about just how we were going to get the bike. The shop is not within easy walking distance, but it just seemed entirely wrong for us to drive to pick up a bike. However, if we both rode over, we would be left with an extra bike. Finally, P strapped on his running sneaks and I packed the boys in the bakfiets and we met over in Wooster Square. We thought it a very good sign that when we pulled up in front of The Devil's Gear a gorgeous xtracycle Big Dummy was parked outside. Inside, we met the owner of that bike and his son-- newly moved to New Haven from Cambridge, MA-- and it turns out that his family owns two xtracycles. Rock on! It made me feel less crazy about buying a second cargo bike. 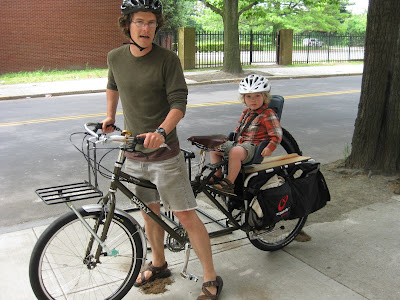 The truth is that for the past months, P and I realized how much we can get around by bike and how often we can leave the car parked. Since we have three children, there are plenty of times when schedules vary and we were finding ourselves in ongoing discussions about who gets the bakfiets and who has to drive. And to be clear-- we were definitely both wanting the bike! While I flirted with the idea of a gorgeous A.N.T. bike or an Oma or Pashley or a number of other single ride vehicles, I thought it best, given the ages and number of kids we have, to go with the xtra and leave one of those bikes for a 50th birthday present. Having two cargo bikes allows us both to travel by bike with a son or two and go in different directions if necessary. It also lets one of us head to the grocery store or farmer's market while the other deals with the kids' transportation, etc. I also liked the idea that I could easily ride the Radish as a single bike for my summer commute while P will be taking on the camp runs in the bakfiets.


I'll have much more to write about the Radish in the coming weeks. It is far, far different than the baks and I am enjoying getting to know her. The twins were insistent we take her to school today so we successfully made our first school commute on her this morning. We did ride her a bit over the weekend between graduation ceremonies and celebrations. At one point, P was riding the bakfiets with two of the fellows while I was on the xtra with one guy riding on the deck. We passed another cycling couple and the woman looked up and said, "Oh, look-- it's the Oregon family." We weren't sure if she actually thought we had lived in Oregon (we have told numbers of people that we got our bakfiets at a bike shop in Portland, but maybe it wasn't clear that we did this via the Internet) or if she simply was referring to the family biking lifestyle that seems far more prevalent out there than here in New Haven. Either way, it made me chuckle and I give a shout out to all those biking and blogging families in Portland, OR and Seattle, WA who have inspired our passion for cargo bikes. 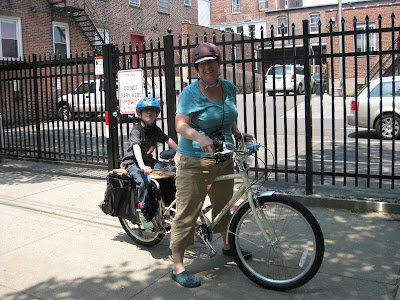 The maiden voyage. We had to pick a name randomly out of a hat (well, bike helmet actually) to determine who got to ride on the back on the way home. 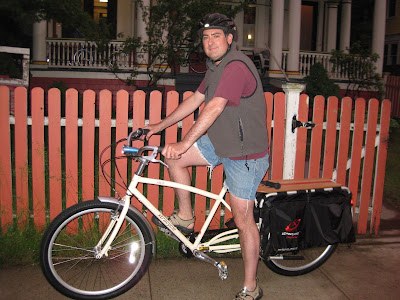 The now graduate going to pick up Japanese take-out. You think there were any other graduating folks who celebrated by bringing home sushi for two once the kids were asleep?
Posted by sara

I was thinking about you and the Xtra the other day. I think it makes perfect sense. In a way getting a pashley or Oma would be like buying a car without a carseat/booster seat for your kids. While I don't like having two kids on the xtra, I like that both my bikes are ready for kids. And as you've seen, I've had friends and other kids feel very happy on the xtra so it works well for all. I think you'll be happy. It won't be the last bike... ha ha ha. Time for a pretty pretty bike later!

congrats on grad to P, happy birthday I see if order for you and yay for the radish!

Just found your blog through Chic Cyclist and have really enjoyed it. I've been dreaming of a cargo bike and loved seeing the pictures of yours.
~Jen

Greetings -- may I post a picture of this Xtracycle on my blog? I don't have many Radishes and would love to get yours up there. Looks like you also have a Big Dummy?

Naturally I will attribute and link and so forth...

That's so exciting! I saw one of these bad boys for the first time in real life the other day. Very nice. Can't wait to see and hear all about your new adventures.

Great site! Excited to hear about your Radish and read more. We added a Madsen to our bike arsenal a few months ago when I decided to stop trying to figure out how to haul three kids on my Xtracycle. That's what bakfietsen and bucket bikes are made for!

I, for one, fully support your bicycle polyamorous lifestyle. Thanks for sharing your thoughts on the two bikes over our way ...